A Look at Today’s Mid-Century Modern

Mid-Century Modern Architecture is one of my favorite architectural styles. It was hugely popular in residential design from the 1930s to the 1960s. Mid-Century Modern was a major shift from heavily decorated architecture to a more simple and honest language. It was an inspiration of many smart ideas that helped the development of today’s sustainable design strategies. Its appearance in the last century is very significant to the residential design history.

How can we learn from the Mid-Century Modern Architecture and incorporate its elements into our 21st century contemporary style?

Why is it hot again all of a sudden? You might ask. The open floor plan design offers many advantages. It maximizes the use of the house’s square footage by minimizing partition walls and enables a smooth, uninterrupted flow. Fig.1 is a very basic example of what an open floor plan could look like. This is extremely important for cities where high density development is essential.

It also comes in very handy for strange shaped property such as Fig.2. One of the advantages I like most is the ability of accommodate large events without sacrificing the flexibility of the space. Who doesn’t want to throw out a big party in their home once a while?

When the term “open floor plan” is used, people always think of a space where the living room, dining room and kitchen are all connected and there are no walls in between. Yes, this is one way of executing it. However, the “openness” of a space is not limited to horizontal. An open floor plan could be a house that allows connectivity between floors. Fig. 3 is an example of an enlarged stair well opening that penetrates multiple floors. Coupling with the use of skylights and large windows, such design dramatically increases the amount of natural lights in areas without access to windows. It also effectively transformed the stair well from merely a circulation mean to the aesthetically pleasing anchor of the house. 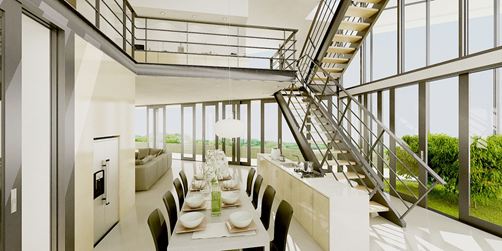 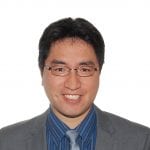 Yu-Ngok Lo is an Architect, AIBD External Vice President, and the founding president of the AIBD Los Angeles Chapter. He is also the Managing Editor of the AIBD Magazine.

Your designs will make you money while you sleep.

Learn how to leverage contemporary digital marketing techniques to land more clients or sell your own plans online.

Success! Now check your email to confirm your subscription.